Do you want to know the most searched things on Bing as of November 2018?

Here’s the data we’ll be sharing in this post:

But before we get to that—some exciting news:

We’ll shortly be adding Bing, Amazon, and YouTube data to Keywords Explorer—our keyword research tool. Here’s a sneak peek at what it will look like: 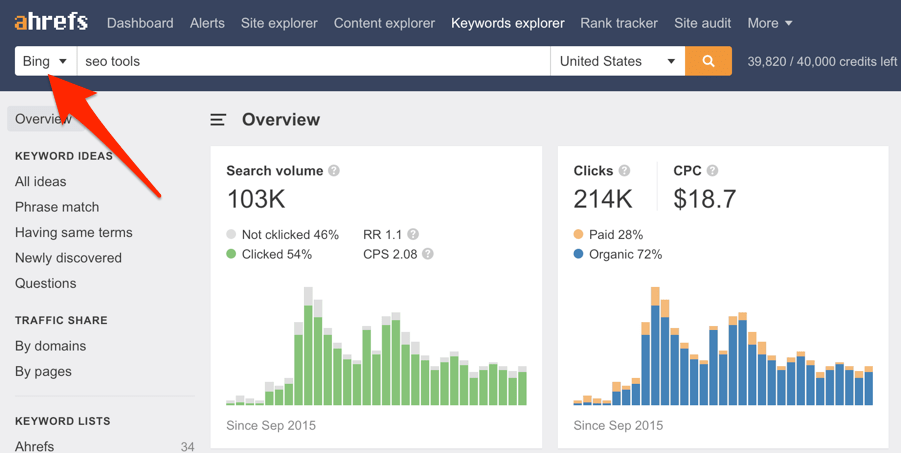 Preview of Bing data in Ahrefs’ Keywords Explorer — to be released soon!

In other words, you’ll be able to use Keywords Explorer to check search volumes for any keyword across Google, Bing, YouTube, and Amazon. Pretty cool, right?

Ready for the data? Here goes…

It’s clear right away that branded queries dominate this list.

A whopping 73% of them revolve around well‐known brands and websites.

Many of the queries are not only branded but navigational—i.e., folks using Bing to search for particular websites or login pages.

Here are some examples of such queries:

Did you notice the same thing as I did?

You might also have noticed an interesting query in 3rd place—”Google.”

Believe it or not, there are over 10 million monthly US searches for “Google” on Bing.

Just in case you’re one of those people, here’s a quick trick 😉 –

You may also have noticed that there are quite a few queries from seemingly frustrated Windows 10 users looking for help.

Amazingly, those three searches alone account for 7.58% of all search volume across the top 100.

No searches related to Windows 10 (or any version of Windows for that matter) appear on our list of the top 100 Google search queries.

And I think I know why…

Windows 10 comes preinstalled with Microsoft’s Edge browser. The default search engine for which is Bing. Do you see the correlation? 😉

Still, there’s significant overlap between the searches people are making in Bing vs. Google. 53% of the top 100 US Bing searches also appear on our list of the top US Google searches.

So if people are searching for something on Google (e.g., your brand), then it’s very likely that the same is true of Bing—just on a lesser scale.

It’s not just US users that use Bing to access Google.

The most popular Worldwide search query on Bing is “Google”—and by quite a hefty margin too.

There are a whopping 48.55M searches for “Google” on Bing every month—that accounts for 14.45% of all worldwide search volume. Crazy!

But the similarities don’t end there:

62% of the top 100 US searches also appear on the worldwide list.

The Worldwide list does include all US searches, which may be part of the reason for the significant overlap.

Here are a few notable searches that are popular around the world but not in the US:

The most interesting observation here is that people around the world seem to be using Bing to download Google Chrome—Google’s web browser.

Not only does that mean that many people are unhappy with their current browser—which is likely to be Microsoft Edge if they’re using Bing—but also their current search engine.

… meaning that this will likely be the last Bing search those people ever make.

Should you really care about Bing?

Hands up who uses Google as their primary search engine?

I’m sensing a lot of raised hands… which is hardly surprising.

So generally speaking, for every search performed on Bing, ten searches are conducted on Google.

Now, I couldn’t find any statistics about the number of daily searches on Bing. However, according to internetlivestats.com, 3.5 billion searches are performed on Google every day.

If we run a few numbers, we can work out that Bing likely gets around 372M searches per day.

Which brings me to:

Have you used Ahrefs’ Keywords Explorer before?

For starters, when you search in Keywords Explorer, we don’t show vague ranges like Google Keyword Planner does. We show precise and accurate numbers based on mountains of clickstream data.

(Not familiar with clickstream? Read this.)

Furthermore, we give you thousands of keyword ideas and suggestions in our various reports. 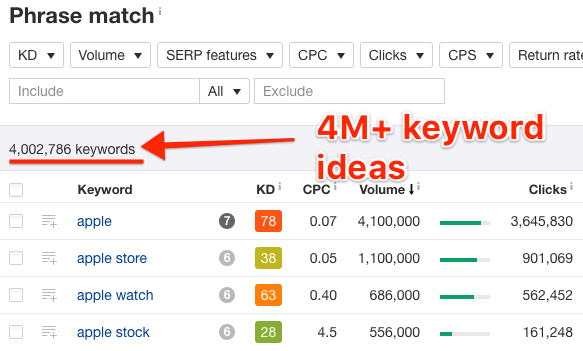 However, all of the keyword search volumes you see above are for Google only—they don’t take into account Bing searches…

Just to recap, here’s what it will look like:

Preview of Bing data in Ahrefs’ Keywords Explorer — to be released soon!

Not only will it show accurate search volume estimate for Bing (based on clickstream data) for the US and other countries, but you’ll also be able to see keyword ideas using those same reports mentioned above.

If all goes to plan, we will release this functionality in the next few months.