I’ve advocated the use of Google’s owner response review feature since it first rolled out in 2010. This vital vehicle defends brand reputation and revenue, offering companies a means of transforming dissatisfied consumers into satisfied ones, supporting retention so that less has to be spent on new customer acquisition. I consider review responses to be a core customer service responsibility. Yet, eight years into the existence of this feature, marketing forums are still filled with entry-level questions like:

Over the years, I’ve seen different local SEO consultants reply in differing degrees to these common threads, but as of May 11, 2018, both agencies and brands woke to a new day: the day on which Google announced it would be emailing notifications like this to consumers when a business responds to their reviews, prompting them to view the reply. 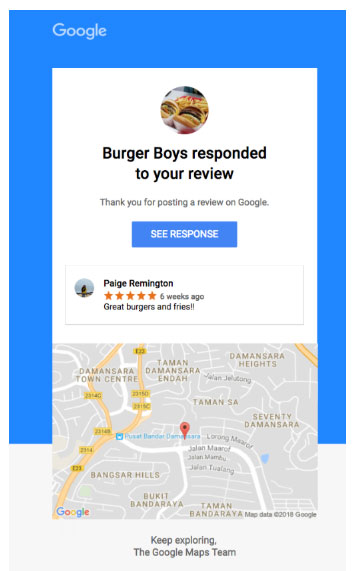 Surveys indicate that well over 50% of consumers already expect responses within days of reviewing a business. With Google’s rollout, we can assume that this number is about to rise.

Why is this noteworthy news? I’ll explain exactly that in this post, plus demo how Moz Local can be a significant help to owners and marketers in succeeding in this new environment.

In the past, owner responses may have felt like something extra a business could do to improve management of its reputation. Perhaps a company you’re marketing has been making the effort to respond to negative reviews, at the very least, but you’ve let replying to positive reviews slide. Or maybe you respond to reviews when you can get around to it, with days or weeks transpiring between consumer feedback and brand reaction.

1) It signals that Google is turning reviews into a truly interactive feature, in keeping with so much else they’ve rolled out to the Knowledge Panel in recent times. Like booking buttons and Google Questions & Answers, notifications of owner responses are Google’s latest step towards making Knowledge Panels transactional platforms instead of static data entities. Every new feature brings us that much closer to Google positioning itself between providers and patrons for as many transactional moments as possible.

2) It signals a major turning point in consumer expectations. In the past, reviewers have left responses from motives of “having their say,” whether that’s to praise a business, warn fellow consumers, or simply document their experiences.

Now, imagine a patron who writes a negative review of two different restaurants he dined at for Sunday lunch and dinner. On Monday, he opens his email to find a Google notification that Restaurant A has left an owner response sincerely apologizing and reasonably explaining why service was unusually slow that weekend, but that Restaurant B is meeting his complaint about a rude waiter with dead air.

“So, Restaurant A cares about me, and Restaurant B couldn’t care less,” the consumer is left to conclude, creating an emotional memory that could inform whether he’s ever willing to give either business a second chance in the future.

Just one experience of receiving an owner response notification will set the rules of the game from here on out, making all future businesses that fail to respond seem inaccessible, neglectful, and even uncaring. It’s the difference between reviewers narrating their experiences from random motives, and leaving feedback with the expectation of being heard and answered.

I will go so far as to predict that Google’s announcement ups the game for all review platforms, because it will make owner responses to consumer sentiment an expected, rather than extra, effort.

The burden is on brands

Because no intelligent business would believe it can succeed in modern commerce while appearing unreachable or unconcerned, Google’s announcement calls for a priority shift. For brands large and small, it may not be an easy one, but it should look something like this:

Defining X is going to have to depend on the resources of your organization, but in an environment in which consumers expect your reply, the task of responding must now be moved from the back burner to a hotter spot on the stovetop. Statistics differ in past assessments of consumer expectations of response times:

My own expectation is that all of these numbers will now rise as a result of Google’s new function, meaning that the safest bet will be the fastest possible response. If resources are limited, I recommend prioritizing negative sentiment, aiming for a reply within hours rather than days as the best hope of winning back a customer. “Thank yous” for positive sentiment can likely wait for a couple of days, if absolutely necessary.

It’s inspiring to know that a recent Location3 study found that brands which do a good job of responding to reviews saw an average conversion rate of 13.9%, versus lackluster responders whose conversion rate was 10.4%. Depending on what you sell, those 3.5 points could be financially significant! But it’s not always easy to be optimally responsive.

If your business is small, accelerating response times can feel like a burden because of lack of people resources. If your business is a large, multi-location enterprise, the burden may lie in organizing awareness of hundreds of incoming reviews in a day, as well as keeping track of which reviews have been responded to and which haven’t.

The good news is…

The screenshot, above, is taken from the Moz Local dashboard. If you’re a customer, just log into your Moz Local account and go to your review section. From the “sources” section, choose “Google” — you’ll see the option to filter your reviews by “replied” and “not replied.” You’ll instantly be able to see which reviews you haven’t yet responded to. From there, simply use the in-dashboard feature that enables you to respond to your (or your clients’) reviews, without having to head over to your GMB dashboard or log into a variety of different clients’ GMB dashboards. So easy!

I highly recommend that all our awesome customers do this today and be sure you’ve responded to all of your most recent reviews. And, in the future, if you’re working your way through a stack of new, incoming Google reviews, this function should make it a great deal easier to keep organized about which ones you’ve checked off and which ones are still awaiting your response. I sincerely hope this function makes your work more efficient!

Please check out Mastering the Owner Response to the Quintet of Google My Business Reviews, which I published in 2016 to advocate responsiveness. It will walk you through these typical types of reviews you’ll be receiving:

The one update I’d make to the advice in the above piece, given Google’s rollout of the new notification function, would be to increase the number of positive reviews to which you’re responding. In 2016, I suggested that enterprises managing hundreds of locations should aim to express gratitude for at least 10% of favorable reviews. In 2018, I’d say reply with thanks to as many of these as you possibly can. Why? Because reviews are now becoming more transactional than ever, and if a customer says, “I like you,” it’s only polite to say, “Thanks!”. As more customers begin to expect responsiveness, failure to acknowledge praise could feel uncaring.

I would also suggest that responses to negative reviews more strongly feature a plea to the customer to contact the business so that things can be “made right.” GetFiveStars co-founder, Mike Blumenthal, is hoping that Google might one day create a private channel for brands and consumers to resolve complaints, but until that happens, definitely keep in mind that:

One of the most interesting aspects I’m considering as of the rollout of response notifications is whether it may ultimately impact the tone of reviews themselves. In the past, some reviewers have given way to excesses in their sentiment, writing about companies in the ugliest possible language… language I’ve always wanted to hope they wouldn’t use face-to-face with other human beings at the place of business. I’m wondering now if knowing there’s a very good chance that companies are responding to feedback could lessen the instances of consumers taking wild, often anonymous potshots at brands and create a more real-world, conversational environment.

In other words, instead of: “You overcharged me $3 for a soda and I know it’s because you’re [expletive] scammers, liars, crooks!!! Everyone beware of this company!!!”

We might see: “Hey guys, I just noticed a $3 overcharge on my receipt. I’m not too happy about this.”

The former scenario is honestly embarrassing. Trying to make someone feel better when they’ve just called you a thief feels a bit ridiculous and depressing. But the latter scenario is, at least, situation-appropriate instead of blown out of all proportion, creating an opening for you and your company to respond well and foster loyalty.

I can’t guarantee that reviewers will tone it down a bit if they feel more certain of being heard, but I’m hoping it will go that way in more and more cases.

What do you think? How will Google’s new function impact the businesses you market and the reviewers you serve? Please share your take and your tips with our community!