Late last week (Feb 28 – Mar 1), we saw a sizable two-day spike in Google rankings flux, as measured by MozCast. Temperatures on Friday reached 108°F. The original temperature on Thursday was 105°F, but that was corrected down to 99°F (more on that later). 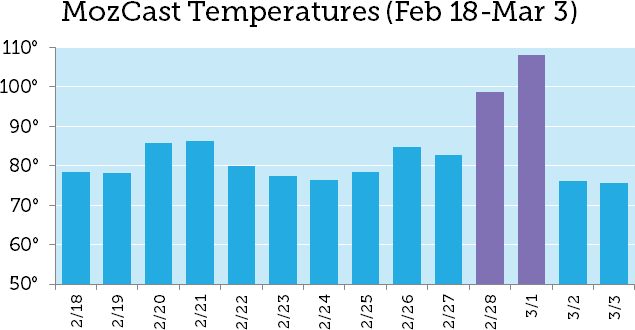 Digging in on Friday (March 1st), we saw a number of metrics shift, but most notably was a spike in page-one Google SERPs with more than 10 organic results. Across the 10,000 keywords in MozCast, here’s what we observed at the high end: 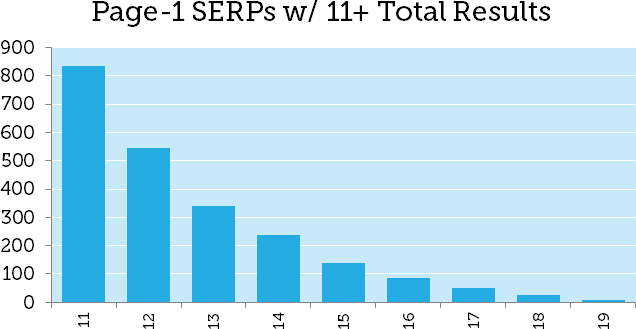 Counting “organic” results in 2019 is challenging — some elements, like expanded site-links (in the #1 position), Top Stories, and image results can occupy an organic position. In-depth Articles are particularly challenging (more on that in a moment), and the resulting math usually leaves us with page-one SERPs with counts from 4 to 12. Friday’s numbers were completely beyond anything we’ve seen historically, though, with organic counts up to 19 results.

Across 10K keywords, we saw 9 SERPs with 19 results. Below is one of the most straightforward (in terms of counting). There was a Featured Snippet in the #0 position, followed by 19 results that appear organic. This is a direct screenshot from a result for “pumpkin pie recipe” on Google.com/US:

Pardon the long scroll, but I wanted you to get the full effect. There’s no clear marker here to suggest that part of this SERP is a non-organic feature or in some way different. You’ll notice, though, that we transition from more traditional recipe results (with thumbnails) to what appear to be a mix of magazine and newspaper articles. We’ve seen something like this before …

Diving into the depths of in-depth

You may not think much about In-depth Articles these days. That’s in large part because they’re almost completely hidden within regular, organic results. We know they still exist, though, because of deep source-code markers and a mismatch in page-one counts. Here, for example, are the last 6 results from today (March 4th) on a search for “sneakers”: 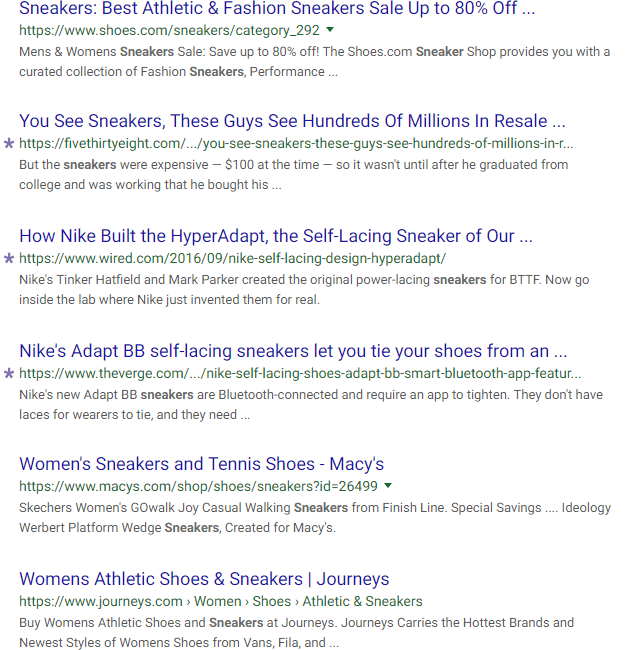 Nestled in the more traditional, e-commerce results at the end of page one (like Macy’s), you can see articles from FiveThirtyEight, Wired, and The Verge. It’s hard to tell from the layout, but this is a 3-pack of In-depth Articles, which takes the place of a single organic position. So, this SERP appears to have 12 page-one results. Digging into the results on March 1st, we saw a similar pattern, but those 3-packs had expanded to as many as 10 articles. 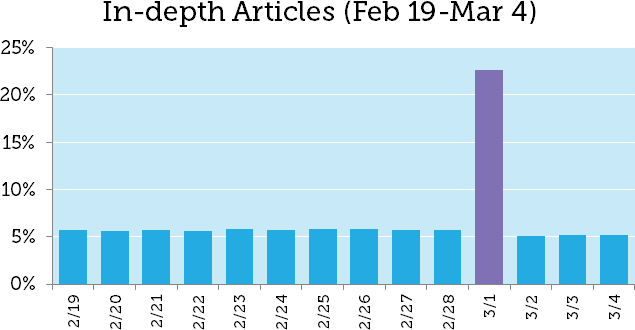 Just under 23% of MozCast SERPs on the morning of March 1st had something similar to In-depth Articles, an almost 4X increase from the day before. This number returned to normal (even slightly lower) the next day. It’s possible that our new definition is too broad, and these aren’t really traditional “In-depth” packs, but then we would expect the number to stay elevated. We also saw a large spike in SERP “real-estate” shares for major publications, like the New York Times, which typically dominate In-depth Articles. Something definitely happened around March 1st.

By the new method (removing these results from organic consideration), the temperature for 2/28 dropped from 105°F to 99°F, as some of the unusual results were treated as In-depth Articles and removed from the weather report.

Note that the MozCast temperatures are back-dated, since they represent the change over a 24-hour period. So, the prevalence of In-depth articles on the morning of March 1st is called “3/1” in the graph, but the day-over-day temperature recorded that morning is labeled “2/28” in the graph at the beginning of this post.

Sorting out where to go from here

Is this a sign of things to come? It’s really tough to say. On March 1st, I reached out to Twitter to see if people could replicate the 19-result SERPs and many people were able to, both on desktop and mobile: 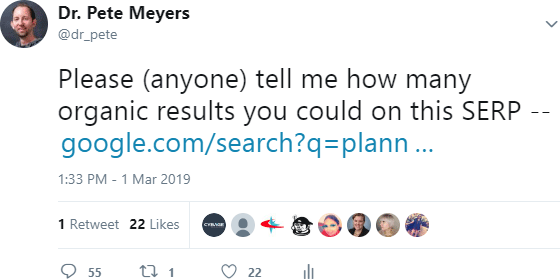 This did not appear to be a normal test (which we see roll out to something like 1% or less of searchers, typically). It’s possible this was a glitch on Google’s end, but Google doesn’t typically publicize temporary glitches, so it’s hard to tell.

It appears that the 108°F was, in part, a reversal of these strange results. On the other hand, it’s odd that the reversal was larger than the original rankings flux. At the same time, we saw some other signals in play, such as a drop in image results on page one (about 10.5% day-over-day, which did not recover the next day). It’s possible that an algorithm update rolled out, but there was a glitch in that update.

If you’re a traditional publisher or someone who generally benefits from In-depth Articles, I’d recommend keeping your eyes open. This could be a sign of future intent by Google, or it could simply be a mistake. For the rest of us, we’ll have to wait and see. Fortunately, these results appeared mostly at the end of page one, so top rankings were less impacted, but a 19-result page one would certainly shake-up our assumptions about organic positioning and CTR.